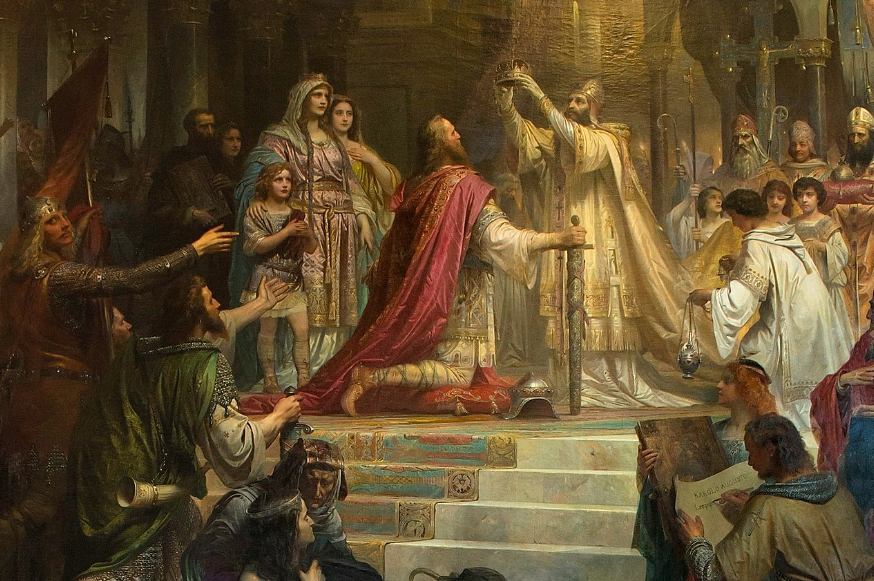 The ancient Romans called the area of ​​present-day France Gaul because it was the land of the Gauls. The Gauls are said to be a branch of the Celts, a warlike nomadic people who spread throughout ancient Europe. The Gauls, who were subjugated by Caesar of Rome after 9 years, gradually assimilated into Rome. Cite Island, where Notre Dame Cathedral and the Supreme Court are located, has already been used as a fortress from this period and has begun to take shape as a city.

With the death of Charles the Great, the Carolingian dynasty was cut off and the Frankish kingdom was divided. Taking advantage of that opportunity, Hugues Cafe, Count of Ile-de-France, where Paris is today, established the Cafe Dynasty. While the divided East Frankish kingdom was strong as the Holy Roman Empire, the Caffe dynasty in the West Frankish region was desperate to survive. The territory of the Caffe dynasty was limited to the Ile-de-France region, and the rest of the region was ruled by the lords of each province. Among them, the most powerful were the current kings of England, who possessed the Duchy of Normandy in northern France and Anjou in central France. However, Philip II, the 7th king of the Caffe dynasty, took all the French territories belonging to the King of England, except for Aquitaine, a granary in southwest France. Due to these achievements, Philip II was later called ‘King of Dignity (August in Latin)’ after the title of Augustus, the first emperor of the Roman Empire.

The founder of the cafe dynasty, ‘Wig Cafe’

After Charles IV of the Caffe dynasty died leaving no heir, his sister’s son, King Edward III of England, and his cousin Philip VI, quarreled for the throne, but, following a Frankish tradition of excluding women from inheritance, eventually became King Philip VI. ascended to the throne This event marked the beginning of the Valois dynasty and the beginning of the Hundred Years’ War. Shortly thereafter, the issue of succession to the throne and territorial disputes over Aquitaine, the granary, led France and Britain to enter the Hundred Years’ War. France, which had a population that was many times Britain’s, was always on the defensive, but with the appearance of her Saint Joan of Arc, it managed to overturn the situation. In the end, England withdrew, leaving only Calais, a bridgehead on the Strait of Dover.

3) The Huguenot Wars and the Bourbon Dynasty

Huguenot refers to Calvinist Protestants in medieval France. Although their number was small, there were many nobles who were hostile to the Valois dynasty. The Huguenots quickly became politically powerful and confronted the Catholics. Here, the Duke of Guise, the head of the Catholic powers, attacked the Huguenots where they were worshiping, causing the 8th Huguenot War (1562-1598) to take place. The confrontation reached its climax with the massacre of the Catholics against Huguenots held on the feast day of St. Bartholomew, where the weddings of the Catholic and Huguenots were held. Henry III, who was generous with Protestantism, died, and the King of Navarre, the representative of Huguenot, ascended to the throne and issued the Edict of Nantes. Henry IV, who was also the beginning of the Bourbon dynasty, after converting to Catholicism, promulgated the Edict of Nantes conditionally recognizing Huguenot’s faith, ending the Huguenot Wars. Although France suffered a serious blow from the Huguenot War, a new political force separated from the religion called ‘politique’ emerged and created an opportunity for France to transform into a centralized state with absolute monarchy. Religious tolerance allowed Huguenots, who were engaged in commerce and industry, to contribute to France’s finances, which played a major role in the development of France into a centralized state. However, this religious tolerance was weakened during the reign of the Sun King, Louis XIV, and this began to crack the absolute monarchy of France.

François Dubois’ painting ‘The Massacre on the Feast of St. Bartholomew’

4. The chaos of the French Revolution and the restoration of the monarchy

The third ‘bourgeois’ citizen class, which contributed to the absolute monarchy, was stimulated by the Enlightenment ideology and eventually initiated the French Revolution, replacing the old system represented by the monarchy with a new system, the republic. However, it was soon forced to return to the monarchy by a hero named Napoleon, and after that, France faced a chaotic period of ups and downs between the republican government due to the revolution and the monarchy due to the restoration of the monarchy. Napoleon’s nephew and ambitious Napoleon III, after ascending to the throne, plunged into the battle for colonialism with imperialist powers. On the other hand, Prussia, where Bismarck, the iron-blooded trader who had been obstructing the reunification of the German Empire in every case, had a thorn in his eyes, finally started the Franco-Prussian War. France suffered the humiliation of the capture of Napoleon III and the capture of Paris, the capital of France. At this time, the region that France handed over to Prussia as a price for defeat was the ‘Alsace-Lorraine’ region, famous for Alphonse Daudet’s novel ‘The Last Lesson’.

Scroll back to top